The English name coconut, first mentioned in English print in 1555, comes from the Spanish and Portuguese word coco, which means “monkey face.” Spanish and Portuguese explorers found a similarity to a monkey’s face in the three round indented markings or “eyes” that are usually found at the base of the coconut. Did you know that on the Nicobar Islands of the Indian Ocean, whole coconuts were used as currency for the purchase of goods until the early part of the twentieth century? Though the coconut’s name suggests that it is a nut, coconuts have always been regarded as fruits. When the coconut is young, it has properties like a fruit, and as it matures, it becomes nuttier. In actuality, the coconut is not a fruit or a nut; it is a seed. Although it takes up to a year for coconuts to mature, the trees bloom up to thirteen times a year. Fruit is constantly forming and a continuous harvest is yielded year round. Coconuts are classified as drupes – they have a dry, fibrous fruit. When coconuts mature, this shell or hard skin turns brown and becomes light in colour and drops from the tree. Inside the tough, fibrous outer shell, there is a hard, bony shell within which is a thin layer of fleshy meat or kernel. The nut contains white and somewhat sweet meat, which is eaten raw; coconut oil is extracted from the meat. The nutritious coconut water is found at the center of the meat and can be enjoyed by drinking it directly from the nut. 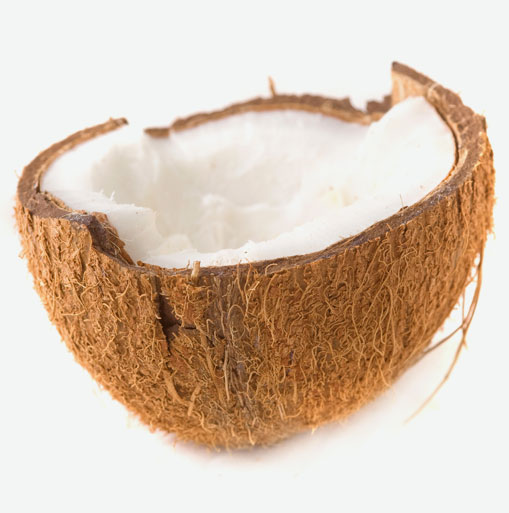 Choose coconuts that feel heavy for their size, having no cracks and avoid those whose circular indented eyes are damp, moist or moldy. Shake the coconut. It should slosh with liquid and sound full. Once opened, the meat is separated from the hard shell and the dark skin is pared off if desired. Fresh unopened coconuts can be stored at room temperature for up to four months, depending on its original freshness when purchased. Grated fresh coconut should be put in a tightly sealed container or plastic bag and stored in the refrigerator for up to four days or frozen for up to six months. One medium-sized fresh coconut will yield about 3 to 4 cups of grated or flaked coconut and 1 cup of liquid. If your freshly shredded coconut becomes dry, soak it in milk for 30 minutes, then drain off the milk and pat dry with paper towels. You can use the drained milk in recipes or blended into smoothies.

First of all to open you must pierce one of the three holes with a clean screwdriver and pour the liquid out. (You can store the coconut milk in the fridge but it must be used within 1 day). Next you can crack the surface of the coconut on something hard (have an adult do this!). It may take several times. Bake the drained coconut at 375 F for 20 minutes. Allow to cool and wrap in clean kitchen towel. Hit the coconut with a kitchen mallet to release the meat from the shell. Chop coconut pieces in a food processor or grate into shreds. It takes some work getting the actual coconut meat out but it is a great lesson on coconuts. Not to mention it makes you appreciate the next time you buy that package of shredded coconut at the store. Try fresh coconut in baking, curries, salads or eaten fresh